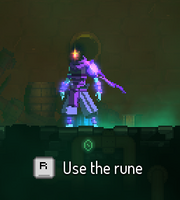 Challenge Rifts are optional areas that can be accessed via interacting with a special symbol that can appear randomly in the floor. They will always begin with a chest which contains the Blueprints for

Crow's Foot, one scroll of power and an amulet, as well as many cells. However, once the chest is opened, the exit closes and the beheaded must complete a set of trap-filled platforming challenges to escape.

Fully completing a challenge rift unlocks the achievement "See, that wasn't so hard now, was it?"